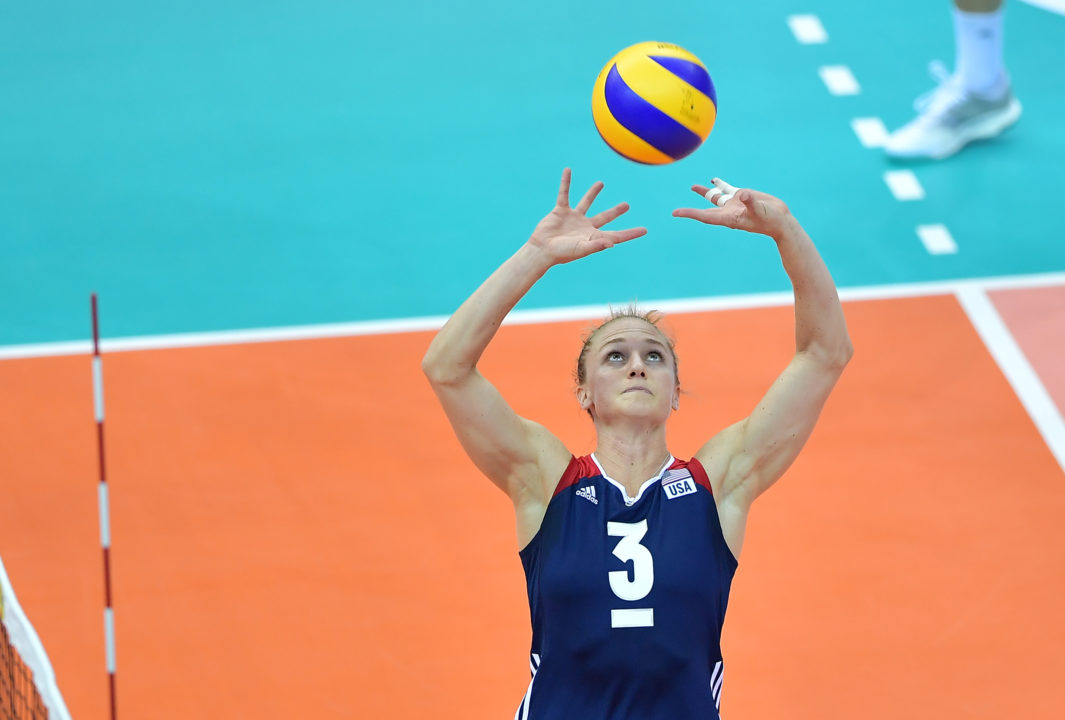 Today was a special day for American Superliga fans as Carli Lloyd and Sonja Newcombe, two current Team USA players, made their debut in the competition, as Hinode/Barueri was defeated by Minas Tênis Clube in a hard fought 3-0 match (25/19, 25/ 23, 25/22). Both players started the game for their respective teams, as Newcombe had the pleasure to be joined by fellow American Destinee Hooker on Minas‘ lineup.

Barueri started the game on the wrong foot with lots of errors, which allowed Minas to open up a 7-1 lead. A timeout by coach José Roberto Guimarães calmed the team, and they quickly chipped away at Minas‘s lead to 9-6 and then 15-15. From there, things started to go downhill again, as Minas scored 5 unanswered points, to put the score at 20-15, then closing the set at 25-19.

The second set started more balanced, as both teams tied the game at 11-11, and kept the scored close until the end. Barueri took a 22-21, looking to close it out, but again unforced errors cost the team the set, as Minas was able to come from behind and close it at 25-23.

Barueri decided to go all in in the third set, and quickly opened up a 7-3 and then a 13-8 lead. After a Minas‘ timeout, the game reached balance again, as both teams tied it at 15. Both teams continued to go back and forth, but Minas just had more energy and was able to close it at the end 25-22.

The loss snaps Barueri‘s 2-game win streak and its attempt to climb up on the standings from its uncomfortable 6th place, while it extends Minas‘ win streak to 4 games, as it sits comfortably in third place.

Needless to say, Carli Lloyd has the better debut of the night, even though this is her first official game after a long recovery from injury. Barueri‘s offense looked more fluid with her as its distributor, as she added speed to the game. Things will only get better as she settles in with her new coach and teammates, and gets back into perfect playing shape. Newcombe, on the other hand, will need a longer time to adjust to Mina’s system and demanding fan-base. Luckily for her, her situation on her new club is different than that of Lloyd’s, as she was signed to be a complimentary piece on Stefano Lavarini’s top-tier squad, while Lloyd was signed to to be the face of a struggling Hinode/Barueri team.

Here is what Lloyd had to say of her debut, according to Melhordovolei.com.br:

“I only had a few days of training with the team and I think I still have to get a better understanding of my teammates. We have a lot of potential, but we need more confidence to play a more consistent volleyball. I really liked the gym and the crowd was great, pushing us through the whole game.”

Great win tonight. Still cheering on my team, excited to join them on the court soon. Go Minas!! 💙💙💙💙