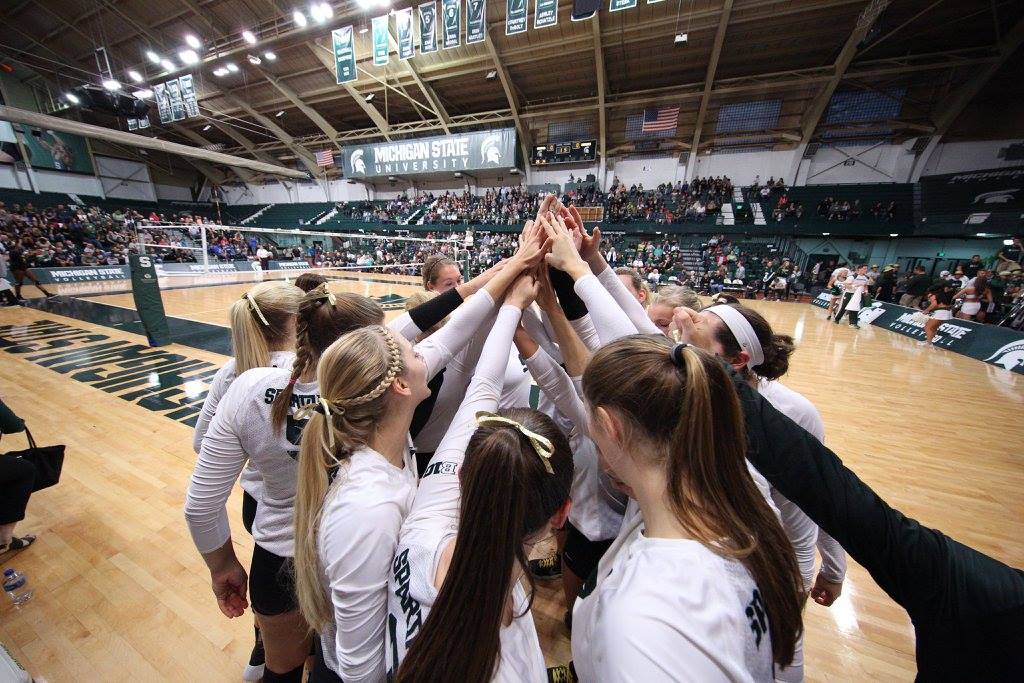 Penn State is the lone team of the four in the University Park regional to make it to the Elite Eight or further in the last five years. Illinois last advanced past the Sweet 16 in 2011, while Missouri and Michigan State last made the regional finals in 2005 and 1996 respectively.  Current Photo via Michigan State Athletics

No. 1 overall seed Penn State is the last of the four seeded teams in the region. The Nittany Lions are one of the three Big Ten teams in the regional pod, alongside Michigan State and Illinois, who will face off in the Sweet 16.

Penn State is the lone team of the four to make it to the Elite Eight or further in the last five years. Illinois last advanced past the Sweet 16 in 2011, while Missouri and Michigan State last made the regional finals in 2005 and 1996 respectively.

Below is a breakdown of each team and matchup as well as our VolleyMob predictions for the pod.

How They Got Here: Missouri (22-11) posted a 13-5 mark in SEC play, good for third place behind co-champions Florida and Kentucky. The Tigers won eight of their last 10 regular season matches, with both losses coming to Florida. Mizzou knocked out Kansas (3-2) and No. 16 seed Wichita State (3-1) in the NCAA first and second rounds in Wichita, Kansas.

NCAA History: The Tigers are making their third straight NCAA appearance and the 14th in program history. Missouri has advanced to the Sweet 16 on three previous occasions, including 2016, and to the Elite Eight in 2005.

Stat Leaders: The Tigers rank 10th nationally in blocks per set (2.93), including two players that put up more than a block per stanza.

Junior middle Alyssa Munlyn leads the way with 1.46 stuffs per set, ranking 16th nationally, while also hitting at a .391 clip (20th nationally). Joining her with more than a block per set is Kayla Caffey (1.01).

Munlyn is one of six players who average more than two kills per set for the Tigers. Freshman Leketor Member-Meneh paces the team with 2.58 kills per set, followed by  redshirt senior opposite Kira Larson (2.43), redshirt senior outside Melanie Crow (2.35), senior outside Sydney Deeken (2.33), Munlyn (2.16) and freshman outside Dariana Hollingsworth (2.05). Larson is clutch behind the service line with a team-best 39 aces, while also adding 2.30 digs per set and 0.73 blocks per set.

The Tigers run a 6-2 offense led by seniors Courtney Eckenrode (7.94 assists per set) and Ali Kreklow (4.02), which have guided the team to a .244 hitting efficiency. In the backcourt, Mizzou relies on redshirt sophomore libero Riley Sents (3.52 digs per set), but Larson (2.30) and Eckenrode (2.02) also assist with the defensive efforts.

In the Tournament: Larson paced a group of four players with double-digit kill tallies in the five-set win over Kansas, notching 17 putaways on a .400 hitting effort and rounding out a double-double with 10 digs. The team hit at a .242 clip and put up 10 blocks in the victory. Deeken headlined the Tiger offense in the upset of Wichita State with 15 kills and 16 digs, while three others posted double-digit kill tallies.

How They Got Here: Penn State (31-1) went 19-1 in Big Ten play en route to a co-championship with Nebraska. The Nittany Lions earned an at-large berth after the Huskers claimed the Big Ten’s automatic berth on tiebreakers. PSU, which is amidst a 21-match win streak, downed Howard (3-1) and Pittsburgh (3-1) in the first and second rounds.

Stat Leaders: As a team, Penn State leads the nation in hitting percentage (.345) and ranks fifth in blocks per set (3.06).

In the Tournament: The Nittany Lions hit .333 and managed 11 blocks against Howard, while Washington (13), Frantti (12) and Gorrell (11) notched double-digit kill tallies. Gorrell hit at a team-high .714 clip (11-1-14). Against Pittsburgh, Penn State put up 17 blocks, including seven each by Gorrell and Washington. Simone Lee carried the offense with 19 kills, followed by Washington (16) and Frantti (14), while the team hit at a .312 clip.

How They Got Here: The Spartans (23-8) earned an at-large berth after finishing fourth in the Big Ten at 14-6. MSU swept Missouri State and downed No. 9 seed Creighton at home in the NCAA first and second rounds.

NCAA History: Michigan State is making its seventh straight NCAA Touranment appearance and 20th overall. The Spartans are making their fifth appearance in the regional semifinals (last in 2013), and are looking for their first fourth round berth since making the central region final in 1996.

Stat Leaders: Redshirt senior outside Autumn Bailey leads a group of four Spartan players averaging more than 2.50 kills per set. Bailey turns in 3.55 kills per set and also adds 3.18 digs per set and 25 aces. Redshirt senior outside Brooke Kranda (3.09), senior outside Holly Toliver (2.97) and senior middle Alyssa Garvelink (2.62) follow. Garvelink is hitting at a team-best .392 clip (19th nationally), while also putting up a team-leading 1.34 blocks per set (25th nationally). Toliver and Kranda also help out from the service line with a team-best 41 aces and 38 respectively.

In the Tournament: MSU outhit Missouri State .340 to .071 with help from 14 blocks. Kranda and Garvelink led the way with 12 kills apiece, while Garvelink notched seven stuffs. Bailey downed a match-high 18 kills, while adding 11 digs as the team hit .325 in the upset of Creighton.

How They Got Here: The Fighting Illini (21-10) earned an at-large berth after finishing tied for fifth in the Big Ten at 12-8. Illinois knocked Hawaii out in the first round for the first time since 1997 (3-2) and then bested No. 8 seed Washington in five sets.

NCAA History: Illinois is making its first NCAA appearance since 2015, eighth in the last 10 seasons and 24th overall. The Illini have advanced to the Sweet 16 or further in each of their last seven appearances, including a national runner-up finish in 2011.

Leading the team at the net is junior middle Ali Bastianelli, who ranks fourth nationally with 1.61 stuffs per set. Bastianelli also ranks 34th in hitting percentage (.377), while turning in 2.48 kills per set. Joining Bastianelli offensively are sophomore outside Jacqueline Quade (3.37 kills per set), redshirt sophomore outside Beth Prince (3.24) and freshman outside Megan Cooney (1.94). Quade is hitting .246 and adds 18 aces.

In the backcourt, senior libero Brandi Donnelly manages 4.40 digs per set, followed by junior setter Jordyn Poulter (2.43) and freshman defensive specialist Megan O’Brien (2.00). Poulter has turned in 12 double-doubles, including a 23-dig effort against Missouri State, while dishing 10.71 assists per set and adding 106 kills of her own.

In the Tournament: Illinois topped Hawaii with a 15 block effort, while Quade paced the team with 15 kills, and Bastianelli managed 10 blocks and nine kills. The Illini racked up 13 blocks against Washington, including eight by Bastianelli. Quade led the offense with 17 kills, followed by Cooney (13) and Prince (12).

Typo. How can Illinois setter (Poulter) play PSU setter (Detering) if the person that made the prediction thinks it’ll be MSU vs PSU in Saturday’s Regional Final? I think he or she meant Minarick.

Good catch. Thanks for pointing that out, Nema, it’s been fixed.