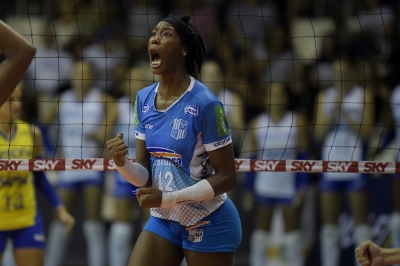 “No doubt this was our hardest game of the season. But, most importantly, the team believed until the end that they could come out with the win. I asked them exact for that that. We had the chance to close in the fourth set, but we had a lack of clarity at the main moments. Fabiana had a very important participation, perhaps the most decisive. I even thought that the match’s MVP prize would be for her. She scored seven points in the fifth set and seven blocks in the game. ”

“We played against Sesc, we did not play against a weak team. And it could be that in the next game, they get to open 2 to 0 and we will make a comeback, as they did. We started the game well, we won two sets on good defense. In the third, we had a great fall in attacking and defense. Rio knew how to balance the game and grew too much in their offensive game. We stopped defending. In the 4th set, it was a shame. We were winning, with a great advantage, and it was the set in which we attacked best in the game. But in the end, in the most important part, we could not manage it. In the tie-break, after they came back, Rio played with much more confidence and managed to close the game. We will not be shaken. We will got at them, I’m sure there’s still a lot to happen.”